The number of possibly contaminated convictions grew, from one to now around 1,500 in central Oregon's Deschutes County alone. 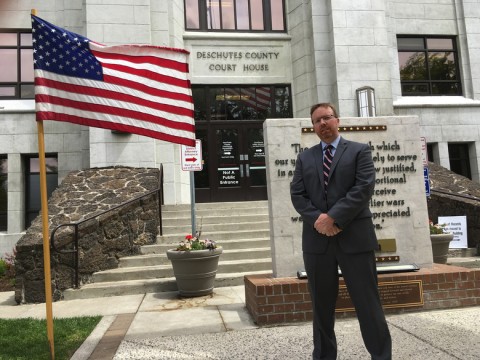 BEND, Ore. — At first, authorities in Oregon believed that the lab tech had been stealing drugs from just one batch of evidence. Then they saw that drugs were missing from other cases she had worked. And then they finally concluded that she had also stolen evidence from ones she had not worked on.

The number of possibly contaminated convictions grew, from one to now around 1,500 in central Oregon's Deschutes County alone.

District Attorney John Hummel is vowing to re-examine each conviction, arguing that revisiting them is critical to ensure that the public has confidence in the justice system. So far, he has recommended 10 convictions be overturned.

"I want people to say: 'You know what? When the DA stands up and says he thinks someone is guilty, he is doing that based on solid evidence,' " said Hummel, whose county's natural beauty belies a reputation for misdeeds by its own lawmen.

Hummel said he has seen the consequences when people lose faith in their justice system, pointing to his experience in a post-civil war Liberia when he'd find smoldering bodies during morning walks, the victims of mob justice.

Nika Larsen, the lab technician from the state police lab in Bend, is suspected of removing drugs and replacing them with over-the-counter medications.

Hummel said a joint investigation by his office, the U.S. attorney, the Oregon Department of Justice and the Umatilla County district attorney is wrapping up and an announcement is forthcoming on who will take the lead on prosecution.

Meanwhile, his office is reviewing all those convictions. So far, a judge has thrown out at least one conviction for methamphetamine possession. The lawyer for another one of the 10 asked the court June 8 for his client's conviction to be thrown out.

George Burgen had been sentenced to 10 days in jail after a sheriff's deputy stopped his car and found a small plastic bag in his wallet, a thin line of a substance on the bottom. An official document refers to it as "meth (residue)."

"Those 10 days in jail, I don't know how I get those back," Burgen said in an interview in his house in the woods near the Deschutes River. "But I was guilty. I did have it in my possession."

Burgen doesn't trust police and cited crimes committed by officers, including a former sheriff who was imprisoned for embezzling hundreds of thousands of dollars and a deputy convicted of giving drugs to teenage girls and sexually abusing them.

"Of those in the justice system, some are criminals themselves, so who are they to be convicting," Burgen wondered over a cup of coffee, a letter from his attorney on the table in front of him. "The hypocrisy is just amazing."

He said he appreciates Hummel's efforts.

"People have to have faith in their justice system, which has been so screwed up in this county," Burgen said. "I'm glad we have a DA who is looking at the whole picture in this way."

Burgen said he had quit using meth long before he was busted. "I decided I was getting too old to do this," he said, adding that he had forgotten that he still had the tiny amount in his wallet.

Some other counties are also investigating possible tampering of evidence, including Umatilla, where Larsen previously worked at a lab in Pendleton.

Hummel's office has posted a spreadsheet, tracking all the cases. The Oregon Innocence Project has applauded Hummel's actions and transparency and called on other counties to follow his lead by opening their own files to the public.

Sali said the group needs to try to improve the process "at every level," from eliminating influence and pressure on technicians to come up with results that please police and prosecutors, to making clear to juries when a finding is not purely scientific but is subject to an analyst's interpretation.

Hummel said he expects his review to be completed in September.