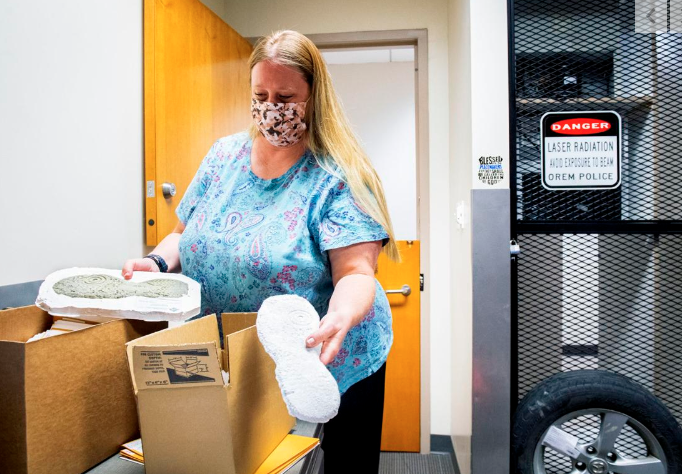 For 11 years Tara Calancea has been caring for, recording and storing evidence from Orem's crime scenes. To her co-workers she is known as the evidence room czar — or better — Czarina.

While Calancea, Orem's evidence technician, admits she is just shy of the formal education most in her career position are required to have, she has "boots on the ground" experience.

That means she has been seeing a lot of crime scenes.

"It feels like I am going out more often," Calancea said about crime scenes. "Every year there are more and more."

Last year she said she had to gather evidence at 27 events for the entire year. She was already at 25 events by the end of August this year.

She's not a crime lab technician like an Abby Sciuto, from the CBS TV show "NCIS." Calancea leaves that to the state crime lab.

But when Calancea goes out on a crime scene, she is taking photos, making videos, placing evidence location markers and then collecting the evidence.

Usually detectives cover homicides. But she says she has been out there for that, too.

"For me that's just the beginning," Calancea said. "Then I have to do the computer work."

Calancea said there are a lot of items in storage, and she has to catalog and record them all. When it comes to homicides, the evidence is kept almost forever.

"We have evidence still from the Gary Gilmore case," she said. "We'll have to keep it for 100 years, long after I'm gone."

For those who may not have heard, Gilmore murdered Max Jensen, an Orem gas station attendant on July 19, 1976. The next night he murdered Bennie Bushnell, a Provo motel manager. Both were Brigham Young University students with young families.

Gilmore was executed, at his request, by firing squad at the Utah State Prison in January 1977. He was the first to be executed in the U.S. since the death penalty had been reinstated in 1976.

That is probably the most notorious crime evidence in Calancea's care, however, there are others that are interesting as well.

On misdemeanor cases, Calancea only has to keep evidence for one year and for felonies from two to five years, generally speaking, depending on the crime. Homicides are in a completely different category, according to Calancea.

"I love my job, particularly when we are working with people and helping them," Calancea said. "It's different every day. There are so many things that keep us busy."

The "us" would be Calancea, who works full time, and one part-time employee.

Calancea said there have been times when she has been involved in gathering "quirky" evidence at the scene.

"At Cherry Hill Elementary (in southwest Orem) a little girl was walking to school in the snow. A man stopped her and took her behind a dumpster and assaulted her," Calancea said. "There were footprints in the snow that showed there were little hearts on the soles of a shoe or boot. We were able to make a silicone mold from the print in the snow."

Calancea went on to say the perpetrator was found through DNA samples and because of the evidence that his shoes and her little boots with the hearts fit the molds that were made.

One of Calancea's many duties is to go to court and describe evidence and the crime scenes, if necessary. She has even been through an autopsy.

"I do a lot of lifting fingerprints and then send them to the crime lab," Calancea said.

For the most part this Czarina works normal hours, but in reality her position is a 24/7 on-call job.

Calancea is not a police officer and does not have Police Officer Standards and Training certification, but as a civilian employee she has received several certifications specifically for evidence collecting and handling.

For 11 years Tara Calancea has been caring for, recording and storing evidence from Orem’s crime scenes. To her co-workers she is known as the evidence room czar — or
https://www.heraldextra.com/news/local/central/orem/orem-city-employee-runs-crime-evidence-room-that-holds-history-of-grim-stories/article_103ecc04-6e26-5da9-9036-0be88f814ccd.html
Tweet
How do you feel about this post?
Happy (0)
Love (0)
Surprised (0)
Sad (0)
Angry (0)
Tags:
evidence room czar West Coast
Arrest made in 40-year-old cold case murder
Former Enfield officer indicted for embezzlement, ...