Federal officials issued an urgent warning Tuesday to local police
across the country to take added precautions in their contacts with
addicts and dealers suspected of carrying the quick acting, deadly drug fentanyl. 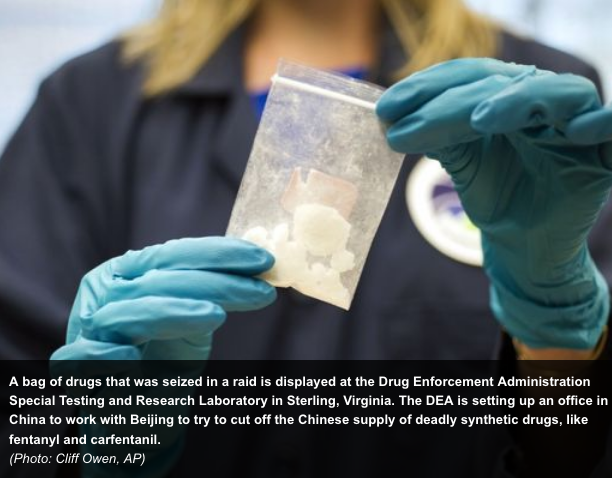 WASHINGTON – Federal officials issued an urgent warning Tuesday to local police across the country to take added precautions in their contacts with addicts and dealers suspected of carrying the quick acting, deadly drug fentanyl.

The dramatic proliferation of the synthetic opiod, often trafficked and packaged as heroin, is up to 50 times more lethal than heroin and the potential threat to law enforcement and other first responders is "stunning,'' said acting U.S. Drug Enforcement Administration chief Chuck Rosenberg.

Accidental contact with a quantity equivalent to five or six grains of table salt can be deadly if inhaled or absorbed through skin abrasions, Rosenberg said, adding that local officers should wear gloves, masks, protective glasses and shoe covers when dealing with the substance.

"We need everyone to know how lethal this is,'' Rosenberg said in a joint briefing with Deputy Attorney General Rod Rosenstein.

Rosenstein said local police in New Jersey, Georgia, Connecticut and Ohio have suffered recent exposures, some of them near fatal.

"This is not a hypothetical problem,'' Rosenstein said. "Just a few weeks ago, a police officer in East Liverpool, Ohio nearly died from exposure to an extremely potent opiod, most likely a fentanyl-related compound.''

The added threat to law enforcement comes as communities across the country are struggling to deal with surging numbers of all overdose deaths. Of the 52,000 such deaths in 2015, about 33,000 were attributed to opiod abuse, including fentanyl.

Since 2013, law enforcement authorities have been tracking alarming increases in fentanyl-related seizures. Between 2013 and 2014, such seizures more than tripled.

The National Forensic Laboratory Information System, which collects data from state and local police labs, reported 3,344 fentanyl-related submissions, up from 942 in 2013.