Provincial officials will conduct an inspection of the Windsor police
drug vault after the disappearance of $25,000 worth of cocaine seized
nearly four years ago. 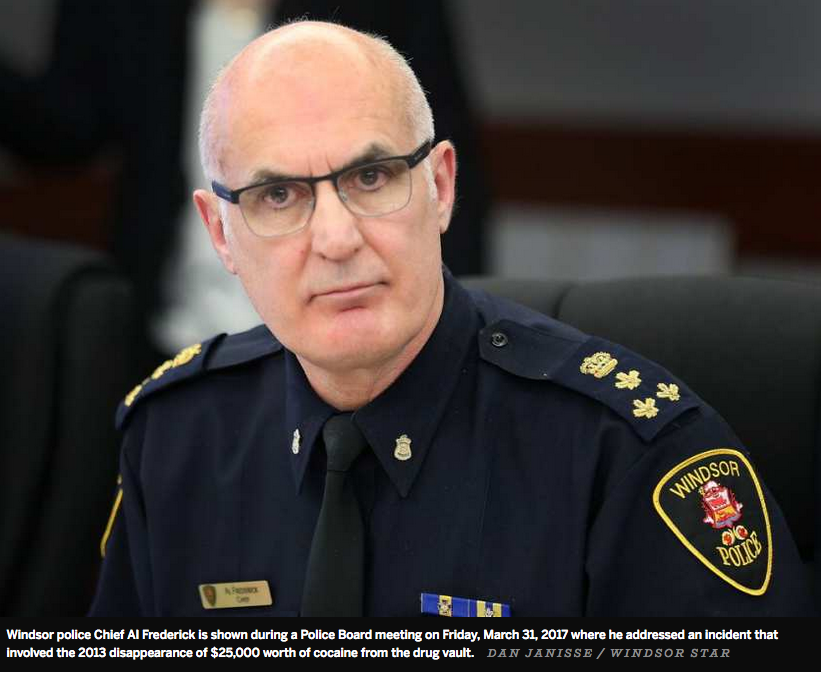 Windsor police lost track of nine grams of cocaine seized as part of a 2013 investigation that included wire taps and multiple arrests. When one of the drug dealers went to trial earlier this year, police could not produce the cocaine they testified they had seized from him. The judge expressed concerns about the missing evidence, but convicted the man nonetheless.

When the Windsor Star broke the story about the judge's comments about the missing drugs, Frederick said he knew nothing about the case. But days later, when questioned publicly at a Police Services Board meeting, he said police had conducted an audit of the drug vault after discovering years earlier the drugs were missing. The audit showed nothing else was amiss, Frederick said, leading him to conclude the drugs must have been erroneously removed from the vault for destruction.

Frederick said he and Mayor Drew Dilkens, chairman of the Police Services Board, wrote to the ministry after that meeting and requested provincial inspectors audit the drug vault and review police practices related to the handling of evidence. "They have an inspection schedule," Frederick said, explaining the ministry routinely conducts audits of various police activities. "This was something special," he said of his request for an inspection of the drug vault.

Dilkens is said to be on a family vacation and could not be reached for comment Tuesday.

The Windsor Star has filed a request under the Municipal Freedom of Information and Protection of Privacy Act for documents related to the destruction of items and subsequent audits of the drug vault.

Provincial officials will inspect the Windsor police drug vault after the disappearance of $25,000 worth of cocaine seized in 2013.
http://windsorstar.com/news/local-news/province-to-inspect-windsor-police-drug-vault
Tweet
How do you feel about this post?
Happy (0)
Love (0)
Surprised (0)
Sad (0)
Angry (0)
Tags:
altered evidence assault  kits Chain of Custody Big Three: drug vault
Brandon couple sues RCMP, Health Canada after pot ...
Deadly Fentanyl Disguised As Prescription Pills
Comment for this post has been locked by admin.