A Brandon couple has filed a civil lawsuit against the RCMP after their legal marijuana grow operation was raided and destroyed. 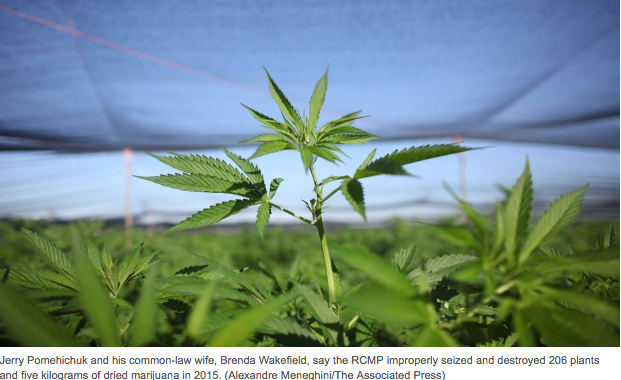 A Brandon couple has filed a civil lawsuit against the RCMP after their legal marijuana grow operation was raided and destroyed.

Jerry Pomehichuk and his common-law wife, Brenda Wakefield, are suing for damages incurred in the raid in June 2015, says a statement of claim filed in Manitoba's Court of Queen's Bench in June.

The couple named three RCMP officers in the suit, along with Health Canada and Canada's attorney general.

No statements of defence have been filed and the claims haven't been proven in court.

The RCMP believed the couple's Health Canada licences to grow marijuana for personal medical use and to possess dry marijuana had expired because they were told by Health Canada that no "business operators" existed in the Brandon area at the time, the claim says.

RCMP also believed the number of plants in the warehouse was above the allowable limit.

The couple was legally allowed to grow 293 plants in the Brandon warehouse, the claim says. Police raided the warehouse and seized 206 plants and five kilograms of dried marijuana on June 21, 2015.

Pomehichuk was later charged with production of a controlled substance and possession for the purpose of trafficking, but federal Crown attorneys stayed the charges on Aug. 14, 2015, after learning Pomehichuk did hold a valid licence from Health Canada.

The couple accuse the RCMP of acting hastily and negligently in their investigation.

"The plantiffs state that Health Canada records any and all inquiries that are made about a licence holder's account.… As of June 22, 2015, there were no inquiries noted on [Pomehichuk's] Health Canada account relating to his licences," the claim states.

"Soon thereafter, Health Canada advised the defendants … that the plaintiffs did indeed hold valid and legitimate licences," the claim says.

As a result, Pomehichuk claims his arrest was unjust and false. He claims Health Canada was also negligent by failing to maintain a proper system to notify authorities about the status of a person's licence.

Pomehichuk and Wakefield seek damages for charter breaches, as well as for the destruction of the marijuana plants and the dried marijuana. The claim says the RCMP's forced entry also caused $400 in damage to a steel door and nearly $2,700 for a safety inspection that was needed as a result.

They also seek $2,800 in legal expenses to defend the stayed charges.

A Brandon couple has filed a civil lawsuit against the RCMP after their legal marijuana grow operation was raided and destroyed.
http://www.cbc.ca/news/canada/manitoba/brandon-couple-sues-rcmp-pot-charges-1.4188331
Tweet
How do you feel about this post?
Happy (0)
Love (0)
Surprised (0)
Sad (0)
Angry (0)
Tags:
altered evidence assault  kits Chain of Custody Big Three:
Appeals court upholds officer’s theft conviction
Province to inspect Windsor police drug vault
Comment for this post has been locked by admin.