Putnam: County officials want missing evidence story to go away but should it?

At a March news conference, the sheriff called it a "colossal failure of leadership" on the part of his predecessor. 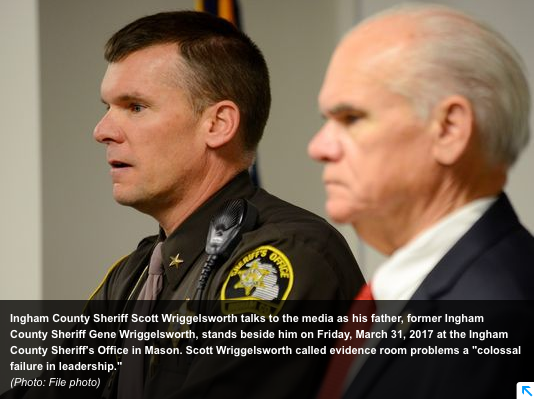 At a March news conference, he called it a "colossal failure of leadership" on the part of his predecessor.

Of course, he was talking about his own father, Sheriff Gene Wriggelsworth, who retired as the longest-serving sheriff in county history with 28 years on the job.

"It sucked, and you can print that," Scott Wriggelsworth recalled in a phone interview Thursday. "My Dad's my hero. Unfortunately, in this case the buck stops with him and the room was a disaster."

The younger Wriggelsworth and other county officials hope to close the door on the property room woes after a Michigan State Police investigation was reviewed by Washtenaw County Prosecutor Brian Mackie. On Monday, his office said there wasn't enough evidence for criminal charges though a memo later released called the room "grossly mismanaged."

The sheriff, some county commissioners and Ingham County Prosecutor Carol Siemon, also elected after the problems surfaced, want to move on, satisfied with new practices in place. Some evidence was ruined by sewage leaks while other evidence went missing with no record of what happened.

"That should be the end of it," Siemon said. "Scott Wriggelsworth has really cleaned it up. It's in great shape now."

But is that enough of a public accounting? Missing evidence has already caused 22 felonies and 57 misdemeanors to be dismissed. Gone are rape kits in seven sexual assaults, evidence in 541 drug cases, four guns, and $398 in seized cash.

The fallout could reverberate for years. It could cause some arrested suspects to go free and commit new crimes. It could damage future cases where stored evidence could help exonerate those falsely accused.

It shakes the faith in the entire criminal justice system.

There's been no responsibility placed beyond blaming the former sheriff because the buck stops with him. The Michigan State Police report has yet to be released.

The problems came to light last September in a story by Lansing State Journal reporter Matt Mencarini, who was the one to tell interim County Prosecutor Gretchen Whitmer and county commissioners — key players in the criminal justice system — about the problems, though they were years in the making.

At any other time, it would have likely been bigger news, but it broke as an avalanche of bad news affected the area, including the ongoing story of the downfall of former County Prosecutor Stuart Dunnings III and the startling revelations about Michigan State University's Larry Nassar, an internationally known gymnastics physician accused of sexually abusing his patients.

Scott Wriggelsworth, who was a lieutenant with the East Lansing Police Department prior to his election, said he sees no good in disciplining any employees involved.

"I didn't work here at the time. My challenge was to fix the problem, which we have done and continue to do," he said.

He said "there were so many hands involved in this over so many years" that to pinpoint "one, two or a handful of people would be pointless."

He also said he believes the evidence wasn't stolen or deliberately misplaced. "I don't believe for one second that anyone took evidence out of the evidence room to steal it," he said.

His actions have drawn praise, even from his GOP rival, Eric Trojanowicz, a retired captain in the sheriff's department who ran against Wriggelsworth in the fall election. "I think he did the right thing. … That had to be a tough situation for him coming out and saying that about his father."

Still, Ingham County Commissioner Randy Schafer, a Republican who sits on the law and courts committee, said he wishes more responsibility had been assigned for the failings, such as criminal charges for negligence on the job.

"I think people don't want to deal with it anymore. I think the legal system wants to move on," he said. "For 1,700 pieces of evidence to disappear, to me is absolutely amazing."

Michigan Attorney General Bill Schuette has found ways to charge state employees and appointees in connection with the Flint water crisis, though his move is widely viewed as political. Schuette's likely running for governor against Lt. Gov. Brian Calley and it's on that administration's watch that the poisoning occurred.

But such charges as misconduct in office and willful neglect of duty in office do add a level of confidence that responsibility is being assigned for the disaster.

Mackie, the Washtenaw County prosecutor, said those types of crimes were considered in his office's review but there was not enough evidence.

Though former Sheriff Gene Wriggelsworth admitted "it's not how I wanted to end my career," he said the public shaming by his son Scott didn't affect their close relationship.

"I agree with him. I was the sheriff. It happened on my watch, and that's how it works in this business," he said.

Putnam: County officials want missing evidence story to go away but should it?