Seized guns, OT piling up for some sheriffs' offices

Valley officials support the law, which is meant to remove weapons from the hands of domestic abusers, 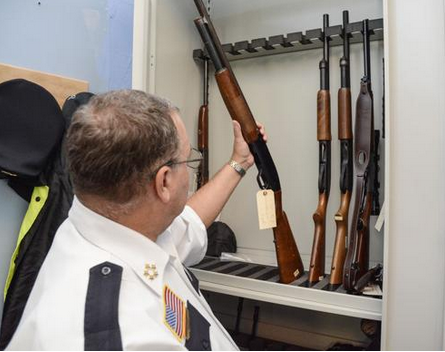 More than 1,200 seized weapons may be in the hands of the Valley's five county sheriffs offices at any given time, according to department officials.

That number has been rising so much since a new state law was enacted in April that authorities are looking for extra storage and paying overtime because of the increased paperwork.

The law, Act 79, went into effect in April after Gov. Tom Wolf signed the bill last October, requires individuals who have been issued a final protection from abuse order to turn in their guns to law enforcement agencies, a firearms dealer or commercial armory, or an attorney within 24 hours of the court order. Previously, individuals who had a protection from abuse order in place could turn over their weapons to family members or friends.

Valley officials support the law, which is meant to remove weapons from the hands of domestic abusers, but the consequences of the new rule are becoming a problem five months after its rollout.

"We were not really given much notice when this happened in April," Northumberland County Sheriff Bob Wolfe said. "I am strongly in favor of this change in the law but at the same time it is causing some concern with where we are storing these guns and how much time it is taking our department to do the paperwork."

All weapons and ammunition must be catalogued and entered into the Protection From Abuse Database (PFAD) within 24 hours of the order.

"We had a case where we had to go get 45 guns," Pidcoe said. "Another we just went out on we had to take 30. Each one of the guns then has to be entered into the system and tracked, then stored away."

In Northumberland County, more than 500 guns are being held. Pidcoe said there has been a consistent increase since the bill became law in April.

More than 1,200 seized weapons may be in the hands of the Valley’s five county sheriffs offices at any given time, according to department officials.
https://www.dailyitem.com/news/snyder_county/seized-guns-ot-piling-up-for-some-sheriffs-offices/article_8eff4bd6-3548-586f-be5c-4f3e27d7ec9c.html
Tweet
How do you feel about this post?
Happy (0)
Love (0)
Surprised (0)
Sad (0)
Angry (0)
Tags:
domestic violence guns East Coast
Former Gwinnett Sheriff's deputy indicted for stea...
Do-it-yourself rape evidence kits halted after sta...