With crime down temporarily, there was time for spring cleaning 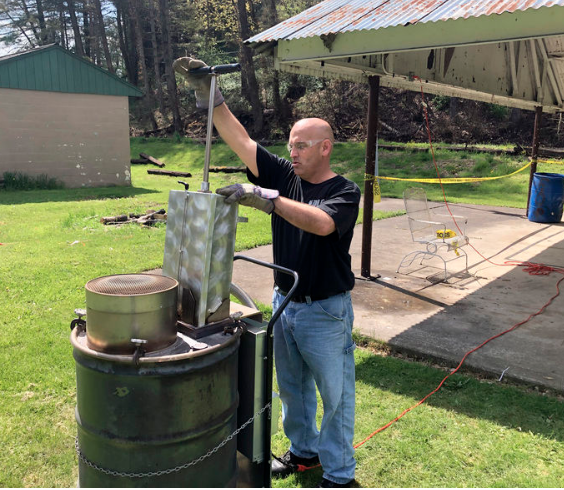 SHARON — With people confined to indoors because of the COVID-19 pandemic, members of the Sharon Police Department had a little time on their hands.

And the department has devoted that extra time to a spring cleanup of its evidence holding area.

Sharon police Capt. Travis Martwinski incinerated the fruits of that cleanup — eight years of evidence, including drugs — Friday at the Sharon FOP gun range off North Water Avenue. The disposal covered cases from 2010 to 2018.

Martwinski said the department last cleared its evidence room in 2010, and Friday's purge will make room for more evidence in future years. The evidence came from several hundred cases over the past decade.

Martwinski said Friday's incineration was probably the biggest burn that city police have ever had.

But it isn't like the police set a bonfire and just chucked massive amounts of drugs into the flames. Sharon police have a special incinerator, which cost about $5,500.

The device, slightly larger than a 50-gallon drum, can be fueled by wood or charcoal. Sharon police held a range day Friday, which included clearing brush, so wood was the choice for this disposal. The incinerator burns at about 800 to 1,000 degrees Fahrenheit.

Martwinski said he burned 10 boxes of evidence Friday. He estimated that there would be only a few cups of ashes left behind.

"It'll burn it down to nothing," he said.

And there isn't any smoke, either. The incinerator is equipped with a Hepa air filter, which means burning the drugs won't release any intoxicating fumes.

The burn session was possible not only because of the incinerator, but also because of a decrease in crime in the city during the state-imposed stay-at-home order. But with Mercer County moving into the yellow designation of Gov. Tom Wolf's "red-yellow-green" reopening protocol, Martwinski said people are going to be back on the streets – for legitimate and illegitimate purposes.

"Downtime is about ready to end," he said.

Martwinski couldn't say exactly how many pieces of evidence he incinerated Friday, but he estimated the figure to be between 700 and 1,000, and each one had a sheet of paper attached. As the drugs were burned, the papers were preserved as documentation.

Processing the paper will be an example of rank having its privileges.

"Some poor patrolman is going to have to count them," Martwinski said. "It won't be me."

SHARON — With people confined to indoors because of the COVID-19 pandemic, members of the Sharon Police Department had a little time on their hands.
https://www.sharonherald.com/news/local_news/sharon-police-incinerate-years-worth-of-drug-evidence/article_982e65cc-3389-5995-b49e-3eebe288ed6d.html
Tweet
How do you feel about this post?
Happy (0)
Love (0)
Surprised (0)
Sad (0)
Angry (0)
Tags:
terminator drug destruction East Coast
Hundreds of pounds of drugs, paraphernalia destroy...
Audit reveals $27K missing from OKCPD property roo...