West Side police to dispose of drugs with incinerator

The device, which cost $4,500, will be available to the 27 police departments on the West Side that belong to the association. 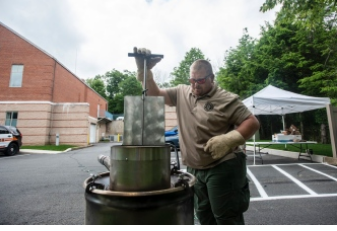 KINGSTON TWP. — Police on the West Side of Luzerne County now have a new way to dispose of drugs and paraphernalia: burn them up in an incinerator.

The Back Mountain Police Association on Wednesday unveiled the device, officially called the "Drug Terminator," and demonstrated how it makes contraband disappear.

"It produces such a high heat, it burns it up," said Tyler Wilson, a Lehman Twp. police officer who serves as public relations director for the association. "It could melt hypodermic needles, marijuana, pills, bongs, smoking devices."

The device, which cost $4,500, will be available to the 27 police departments on the West Side that belong to the association.

Leaders of the organization say they incinerator was necessary due to the vast amount of unneeded and unwanted prescription drugs that have been discarded at secure drop boxes at police departments around the county.

Likewise, many local departments are in possession of large amounts of drug evidence from cases that have been closed, Wilson said.

Previously, local police would hand the drugs over to the federal Drug Enforcement Agency for destruction.

"Before, we'd have to wait for the DEA to come around every so often. It was a complicated, time-consuming process," Wilson said.

The device, which features a 55 gallon burn drum, is fueled by charcoal that ignites a blower motor that produces temperatures up to 2,500 degrees.

Drugs and paraphernalia are placed in a feeder tray and then entered into the incinerator.

A short time later, all that is left is residue that could be safely discarded.

Wilson said leaders of the Back Mountain Police Association saw a demonstration for the incinerator years ago and knew one was needed locally.

"As soon as we saw it, we said we need that," Wilson said.