Cop who stole pills, cash gets 90 days in jail

Ex-Upper Darby Police Officer Brad Ross may have stolen as many as 3,767 pills, along with $14,220.54 in cash, cellphones, gift cards and jewelry, from the Upper Darby police evidence room, 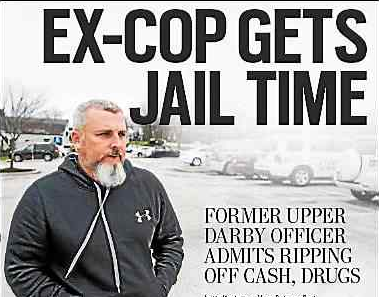 MEDIA COURTHOUSE >> A former Upper Darby police officer who pleaded guilty in June to stealing pills and money from the department's evidence locker was sentenced to 90 days in prison and three years of probation Friday.

Brad Ross, 42, of the 600 block of Massachusetts Avenue in Aldan, will serve his time over 45 consecutive weekends at the county prison in Concord under the sentence handed down by Judge Gregory Mallon. He will also spend 60 days on electronic home monitoring and perform 96 hours of community service.

Ross was charged in December with hundreds of counts of theft, receiving stolen property, tampering with evidence, obstructing the administration of law, hindering prosecution and official oppression.

Upper Darby Criminal Investigator Kevin Dinan first noticed something was amiss in the evidence room on Jan. 29, 2015, when he found several pills missing from an evidence bag that had been torn open, according to District Attorney Jack Whelan.

Dinan contacted Ross, who was assigned to the evidence room and investigated drug crimes. Ross indicated the evidence was removed from the bag because it needed to be rephotographed.

Ross checked himself in to an inpatient drug rehabilitation program within a day or two of that incident, Whelan said.

The Upper Darby Police Department Office of Professional Standards launched an internal investigation and discovered additional evidence was missing, including cash and narcotics.

Whelan's office was contacted and a joint investigation with members of the Delaware County Criminal Investigation Department began. A warrant was served at Ross's home in February 2015, where detectives found a pill bottle that was part of the evidence in an October 2012 arrest.

A full audit of the evidence room revealed some 203 evidence envelopes had been tampered with.

Detective Robert Lythgoe, a member of the county's Special Investigations Unit, said Friday that a total 3,767 pills could not be accounted for, including 2,345 items previously identified as controlled substances. Another 1,412 pills that had not yet been analyzed were also missing, he said, along with $14,220.54 in cash, cellphones, gift cards and jewelry.

Ross entered an open guilty plea in June to six counts of theft by unlawful taking, as well as one count each of obstruction and tampering with public records.

Assistant District Attorney Thomas Lawrie said some 194 cases could have been impacted by Ross's actions and at least four burglary cases were when he could not testify as a witness.

Lawrie noted Miguel Escalon, who slit the throat of Wilson Zunija Aquirre inside an Upper Darby bar in 2014, was also able to plead to third-degree murder and receive a sentence of 18 to 36 years because Ross could not testify in that case. That should have been a first-degree murder case, according to Lawrie.

Lawrie asked the judge to consider those cases as well as the embarrassment and damage to the department's reputation in crafting a sentence. He added Ross should not be given a "get out of jail free" card because of his badge. Lawrie said Ross should rather be held to a higher standard because of his role as law enforcement.

"The defendant violated his oath of office, he violated the trust of the department and ultimately he violated the law, and these items, we think, are worthy of a jail sentence," Lawrie said. "The nature and the quantity of the thefts here should deny the ability to simply walk away from this courtroom on probation."

Defense attorney Brian McMonagle argued Ross's actions to get clean and stay clean once the thefts were discovered should weigh heavily in favor of leniency. He noted Ross was a well-respected officer who won an Officer of the Year award for his dedication in 2012 and that he has been steadily employed in construction to provide for his family following his fall from grace, including two orphaned nephews.

"The test of a man isn't whether he ever falls down in life, it's what he does once he falls down – does he get back up?" said McMonagle. "After he fell down, (Ross) stood up. He went and got himself clean and it's not that those 45 days (in treatment) ended. Every day is a struggle. Every day he resists the temptation of falling down again."

Ross, who resigned from the force March 17, 2015, said Friday that he suffered a back injury during a 2010 car crash and sought medical treatment. A doctor prescribed him Percocets for the pain and he said he simply continued taking them for five years.

"I never touched drugs growing up, I just go to that doctor in 2010 and that's what it resulted in," he said. "It was bad and I fell hard."

Lythgoe and county Detective Kenneth Bellis determined from patient records that Ross had been prescribed 1,402 Oxycodone tablets between Sept. 12, 2013, and Jan. 20, 2015, according to an affidavit of probable cause.

Ross, an officer for 20 years, apologized to his family and fellow law enforcement Friday, saying he never expected to end up in this situation.

Ross's stepson also testified to his excellent parenting skills and work ethic, and his brother, Dan Ross, said Ross has been able to rebuild a healthy family relationship since coming out of inpatient treatment.

"I think something our family has taken away from this is no family is immune to addiction," he said.

Mallon acknowledged Ross had accepted responsibility for his actions, but could not fathom that it took him so long to realize he had a problem and noted there was no accounting for the missing cash.

In addition to prison time and probation, Ross was ordered to repay $14,220.54 to the Upper Darby Police Department and $17,204.84 to the District Attorney's Office for costs incurred during the investigation. McMonagle indicated Ross has already paid restitution to the department.

Ross is scheduled to report for his first weekend at the prison Sept. 23.