"One of the officers started having numbness and tingling in his hand and mild dizziness and feeling lightheaded," Kurten said. 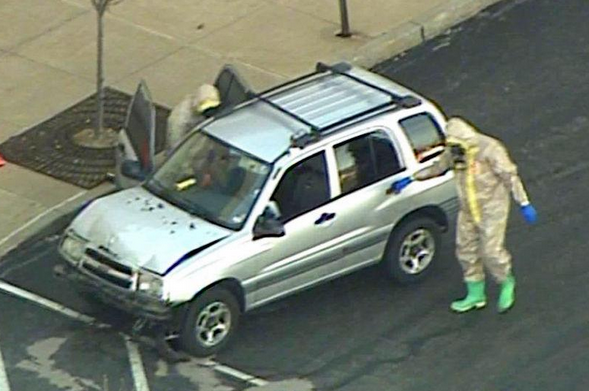 UPDATED at 4 p.m. with new information, including results of tests showing substance was fentanyl.

BRENTWOOD • Two St. Louis County police officers were taken to a hospital after being exposed Tuesday to fentanyl while trying to arrest a man who tried to leave the scene of an accident.

Brentwood Fire Chief Terry Kurten said the incident began after officers from the St. Louis County Police MetroLink unit saw a crash about 9 a.m. along Hanley Road near Eager Road. The officers saw one of the vehicles involved in that accident dragging something and moving erratically.

When the officers stopped the car, a capsule with fentanyl opened as one of them tried to arrest the man, Kurten said.

"One of the officers started having numbness and tingling in his hand and mild dizziness and feeling lightheaded," Kurten said.

Kurten said a hazardous materials team used equipment to determine that the white powdery substance was fentanyl. The painkiller can be lethal if ingested even in small amounts. It's often laced in a powder form with heroin, and has caused a surge in fatal overdoses throughout the country.

The conditions of the officers were not available, but the situation was not believed to be life-threatening.

First responders cleared the area by about 12:30 p.m., Kurten said.

County officers hospitalized after exposure to fentanyl during traffic stop in Brentwood | Law and order | stltoday.com

Brentwood police chief says incident began when a driver involved in an accident at Hanley and Eager roads tried to flee from the scene
https://www.stltoday.com/news/local/crime-and-courts/county-officers-hospitalized-after-exposure-to-fentanyl-during-traffic-stop/article_97641b82-7b4f-55c4-9818-eeb93da4ccee.html
Tweet
How do you feel about this post?
Happy (0)
Love (0)
Surprised (0)
Sad (0)
Angry (0)
Tags:
officer hospitalized fentanyl
Former Kenmore police chief pleads guilty to steal...
Prosecutor: Trooper faces missing evidence investi...
Comment for this post has been locked by admin.