The Nebraska State Patrol made a history-making drug bust as it seized 118 pounds of the opiate drug fentanyl last month. 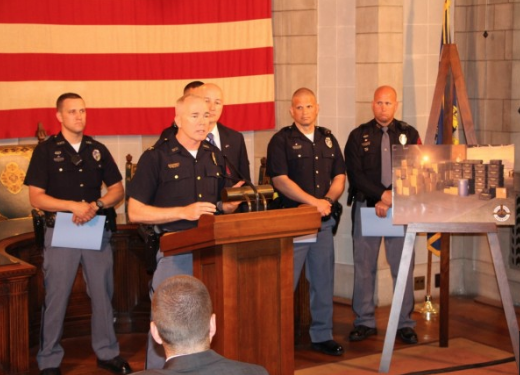 The bust is the largest fentanyl seizure in the history of Nebraska and among the largest in the United States.

The drugs were seized during a routine traffic stop. Nebraska State Patrol Col. John Bolduc said that the troopers became suspicious of a semi-truck that was driving on the shoulder lane, prompting them to search the vehicle, which eventually led to the discovery of the illicit drugs concealed in a hidden compartment.

The troopers did not immediately test the drugs out of caution given the dangerous nature of the substance. They initially thought that most of the drugs were cocaine but further testing revealed these was all fentanyl.

"Further testing from the NSP Crime Lab has confirmed that the entire 118 pounds of drugs seized during a traffic stop on April 24 in Buffalo County is fentanyl," the Nebraska State Patrol said in a statement. "Without question that traffic stop saved thousands of lives."

There have been incidents of police officers and drug overdose responders falling ill due to accidental exposure to the drug.

Last year, three police officers were taken to a hospital in Everett, Massachusetts

after responding to a car crash that involved three men suspected of drug overdose. The police officers showed symptoms of overdose after exposure to fentanyl found in a cigarette box inside the car.

A fentanyl spill at the Duluth Police Department , which also happened last year, likewise became a hazmat situation. A police officer and a crime scene technician had to be quarantined because they were exposed to the drug.

Seized Amount Of Fentanyl Could Kill More Than 26 Million People

The US Drug Enforcement Administration said that just 2 milligrams of fentanyl can be deadly, which means that the amount of the drug that was taken into custody would be enough to kill 26. 8 million people. The value of the drug is estimated to be at over $20 million.

The truck's driver, 46-year-old Felipe Genao-Minaya, and the passenger, 52-year-old Nelson Nunez, both from New Jersey were arrested.

More than $20 million worth of fentanyl drug were seized by the Nebraska State Patrol during a routine traffic stop. It was the largest fentanyl seizure in the history of Nebraska.
http://www.techtimes.com/articles/228700/20180527/fentanyl-bust-in-nebraska-seizes-118-pounds-of-opioids-enough-to-kill-26-million-people.htm
Tweet
How do you feel about this post?
Happy (0)
Love (0)
Surprised (1)
Sad (0)
Angry (0)
Tags:
nebraska state patrol seizure fentanyl
107 Ventura County cold cases could come closer to...
DNA links man to 1979 cold-case murder: police
Comment for this post has been locked by admin.