An officer who was once head of the Halton Regional Police Drug and Morality Unit and is now facing criminal charges is accused of stealing 89 pills from the evidence locker and ordering another officer to destroy drug exhibits. 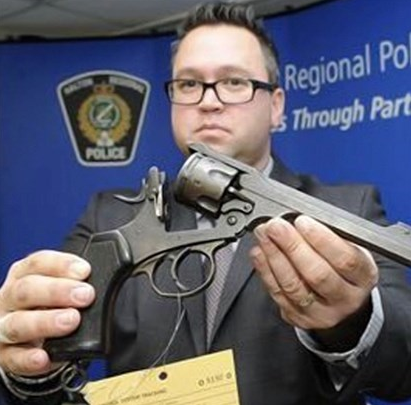 MILTON — An officer who was once head of the Halton Regional Police Drug and Morality Unit and is now facing criminal charges is accused of stealing 89 pills from the evidence locker and ordering another officer to destroy drug exhibits.

The specifics of the allegations against suspended Staff Sgt. Brad Murray are contained in court documents. The allegations have put 30 cases connected to the compromised drug evidence in jeopardy.

His case was spoken to briefly in the Milton courthouse Tuesday and put over to Sept. 12.

Murray, a 16-year veteran, was not in court. Nor was he in court for his previous court date in June. His lawyer, Joanne Mulcahy, has not returned The Spectator's calls.

Murray, 38, was arrested May 28 by Toronto police detectives brought in by Halton's Chief Steve Tanner to investigate. Murray was charged with two counts of theft under $5,000, two counts of breach of trust, and one count of obstructing justice.

Documents show that between Aug. 27, 2015, and April 30, 2016, in Oakville, Murray is accused of stealing 44 drug tablets relating to a Halton police case. That relates to one of the theft charges and leads to one of the breach of trust charges "in connection with the duties of his office by stealing and/or tampering with seized evidence and/or exhibits."

On April 13, 2016, Murray allegedly "did wilfully attempt to obstruct, pervert or defeat the course of justice by ordering another officer to destroy drug exhibits" related to a different case, court documents show. He allegedly gave the order "prior to the conclusion of the court proceedings."

On March 15, 2016, Murray allegedly stole 45 drug tablets that were evidence in another Halton case. For that he faces the second set of theft and breach of trust charges.

Murray, as head of the drug unit, had authorization to access the locked storage area. The evidence was tampered with during his time leading the unit.

Tanner has said the missing drugs are highly addictive opioids. He has also said police do not believe they have made their way back onto the streets. That suggests the allegation that Murray was stealing them for his own use.

Canada is in the throes of a pervasive and deadly opioid addiction crisis, with many becoming hooked on the painkillers after they are prescribed by doctors following events like back injuries or knee surgery.

Murray is currently suspended with pay, the only option available by law to Ontario police chiefs who want to take officers off active duty while facing charges.

Most often, police services allow criminal proceedings to conclude before laying Police Services Act (PSA) charges against an officer. It is possible, however, for a service to go ahead with PSA charges before that, in an effort to expedite the process and the amount of time an officer is suspended with pay. No PSA charges have been laid against Murray.

At about the time Murray was leaving the drug unit in May 2016, he was heavily involved in promoting a "Prescription Drug Drop-Off Day" which encouraged the public to drop off old and unused prescription medications at various locations, including Halton police stations.

"Spring Cleaning?? Safeguard your home by dropping off your unused and unwanted prescription drugs," he tweeted on April 9, 2016.

Court documents show Halton police officer Brad Murray is accused of stealing 89 pills and ordering another cop to destroy evidence.
https://www.thespec.com/news-story/7482379-halton-police-officer-accused-of-stealing-pills/
Tweet
How do you feel about this post?
Happy (0)
Love (0)
Surprised (0)
Sad (0)
Angry (0)
Tags:
Big Three: evidence locker Chain of Custody assault  kits altered evidence
Slaughter enters guilty plea in federal court for ...
FDA to step up targeting of fentanyl, other synthe...
Comment for this post has been locked by admin.