Include least 3,163 grams of shabu and 180 grams of marijuana seized in different operations conducted by the Philippine Drug Enforcement Agency and the Philippine National Police. 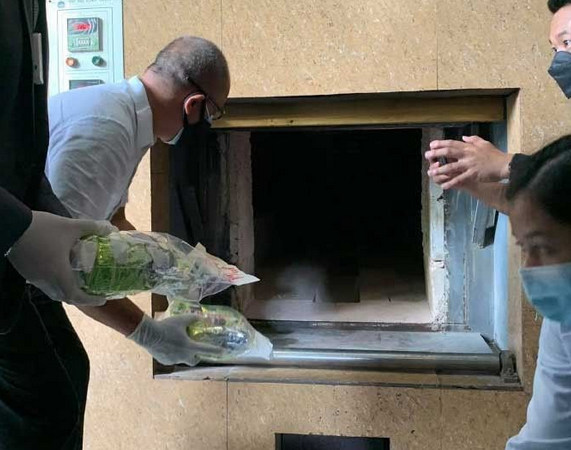 CEBU, Philippines — At least P21 million worth of illegal drugs were destroyed through thermal destruction at the Cosmopolitan Funeral Homes in Cebu City early morning yesterday.

These include least 3,163 grams of shabu and 180 grams of marijuana seized in different operations conducted by the Philippine Drug Enforcement Agency and the Philippine National Police.

PDEA-7 regional director Levi Ortiz said the destruction is an indication that no pieces of evidence recovered during operations were being recycled.

Since October of last year, this has been the fourth drug destruction conducted by the law enforcement agencies.

"Naa pa (to destruct) continuous ni, as long as the court will issue an order for the destruction of the evidence then continuous atong destruction," said Ortiz.

Ortiz also assured that the place where the pieces of evidence confiscated were placed is heavily locked that only the PDEA regional director, the chief chemist and the evidence custodian can access.

Regional Trial Court Judge Marlon Moneva assessed that over the pandemic the cases on illegal drugs have increased.

Moneva also said that the process in court is in quick pace leading also to a more early destruction of the evidence.

He added that the court order plays a vital role in the destruction since they will be the one giving the go signal to conduct it.

"As a matter of fact kung paspasan nato na siya, dili gyud na siya discretion sa judge, I think it is a duty really to issue the order," he said.

Furthermore, Ortiz said based on their comparative study, they noticed a lesser demand of illegal drugs at present.

He said that from January to April of last year, at least P120 million worth of drugs were confiscated, a huge figure compared to P54 million seized in the same period this year.

P21 million worth of illegal drugs ‘cremated’ | The Freeman

50 kilos of the drug have washed ashore this week ...
Rifle reunion: Jefferson County Sheriff’s office r...
Comment for this post has been locked by admin.