At that time, we submitted about 724 SANE (Sexual Assault Nurse Examiners) kits," Breedlove told KRIS 6 News. "All but about two hundred of those kits have been analyzed by DPS." 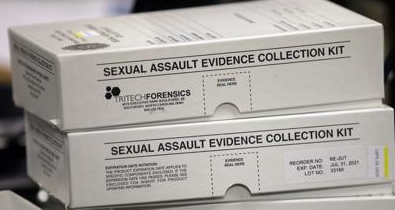 Thousands of rape kits across Texas, including some that have been sitting on shelves for years, remain untested. Thanks to a new law recently signed by Governor Greg Abbott, that backlog could soon be cleared and bring justice to more victims.

This week, Gov. Abbott signed House Bill 8 into law. It mandates law enforcement agencies to conduct an audit of its untested rape kits and then set timelines to make sure they are analyzed. Deputy Chief Billy Breedlove of the Corpus Christi Police Department said there was a similar requirement in a bill that passed in 2017.

"At that time, we submitted about 724 SANE (Sexual Assault Nurse Examiners) kits," Breedlove told KRIS 6 News. "All but about two hundred of those kits have been analyzed by DPS."

This most recent measure will require those agencies to do an audit of all remaining untested rape kits and set timelines to make sure they're analyzed. Breedlove says this could be helpful in tracking down offenders whose victims didn't file charges. Previously, those kits often weren't sent off for testing.

"This now allows a lot more data to be put into the system and that way we can identify serial rapists or other unidentified individuals," he explained about House Bill 8.

Another major difference with this year's measure is the funding component. Roughly $50 million dollars is being allocated to hire more workers for the state's crime labs, as well as ensure underserved populations have access to nurses who are trained to collect evidence for rape kits.

Police say although the backlog doesn't necessarily hamper investigations, it does keep cases from making it to court. For that reason, Matt Manning with the Nueces County District Attorney's Office is grateful for the new law.

"Anything we have in our toolbox that we can use to help bring justice to the citizens via a conviction for someone who has victimized someone is a tool that we're going to welcome," Manning told KRIS 6 News. "This is among the most compelling evidence that we have to put in front of 12 citizens to say, in fact, this person is the person who victimized this person on this date."

Manning adds that this measure will further support the great work of DPS and area law enforcement in swiftly bringing these cases to a resolution.

"Whatever we can do to hold people accountable, particularly those who are committing violent crimes, we're going to do it 100 percent of the time."

The new law also requires evidence to be kept for at least 40 years or until the statute of limitations runs out, whichever is longer.