What is fentanyl? 10 things to know about the potentially deadly drug

According to the Atlanta-based Centers for Disease Control and Prevention, strains of fentanyl can be 50 times more powerful than morphine. 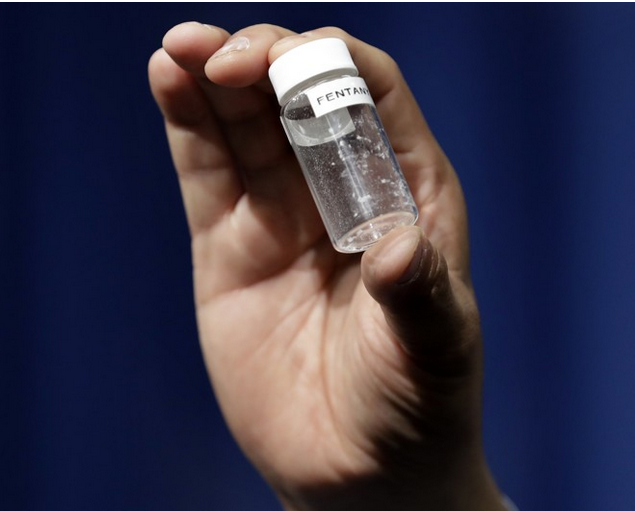 Fentanyl, also known as Actiq, Duragesic or Sublimaze in its prescription form, is an especially potent painkiller developed in the 1960s used to treat extreme pain.

According to the Atlanta-based Centers for Disease Control and Prevention, strains of fentanyl can be 50 times more powerful than morphine.

Some street names for the drug (or for non-pharmaceutical fentanyl-laced heroin) include Apache, China Girl, China White, Dance Fever, Friend, Goodfella, Jackpot, Murder 8, TNT and Tango and Cash, according to the National Institute on Drug Abuse.

Where is fentanyl manufactured?

According to a recent U.S. government report, fentanyl in recent years has been traced back to illegal labs in China and Mexico, trafficked to countries (like the U.S.), laced with heroin and sold to buyers who have no knowledge of the drug's presence.

When do doctors prescribe fentanyl?

The controlled substance can be legally prescribed via injection, patch, lozenges or lollipop.

What are the side effects of fentanyl?

From the National Institute on Drug Abuse:

How does fentanyl work?

Fentanyl (and other opioids) binds to receptors in parts of the brain that control pain and emotions, increasing dopamine levels and creating a state of euphoria.

What makes fentanyl so dangerous?

Like any opiate, fentanyl use can increase the risk of dependency and lead to both abuse and addiction.

When the drug isn't properly ingested as prescribed or is consumed illicitly or accidentally, just one small dose can result in death.

Because fentanyl is so highly potent, drug dealers have increasingly been mixing heroin, oxycodone or Xanax with fentanyl, deceiving buyers who are unaware that a powder or pill contains the drug.

But this deception, according to Harvard Medical School, is proving fatal.

One strain of fentanyl (furanyl fentanyl) is so potent that you could die from just touching it, according to the Georgia Bureau of Investigation.

The furanyl fentanyl, labeled and sold as oxycodone pills and powder, caused 19 deaths in Georgia from 2016 to 2017.

Some of the opioid receptors in the brain that fentanyl binds to also help control breathing, but high doses of opioids such as fentanyl (usually consumed accidentally or illicitly) can stop someone from breathing altogether, killing them.

What are the symptoms of fentanyl overdose?

From the National Institute on Drug Abuse:

If an overdose is suspected, call 911 for emergency medical help.

How is fentanyl overdose treated?

In fentanyl overdose cases, doctors may administer naloxone (or Narcan), a medication that can quickly stop opioid overdose effects by blocking opioid receptors, according to the Substance Abuse and Mental Health Administration.

But some strains of fentanyl, like acrylfentanyl and tetrahydrofuran fentanyl, are so deadly, they may be immune to naloxone, according to the Georgia Bureau of Investigation.

The best way to avoid fentanyl overdose is to get help with abuse and addiction.

How many people in the U.S. die from fentanyl overdose?

According to the CDC, approximately 9,500 people died from overdoses involving synthetic opioids other than methadone in 2015 and a majority of those were found to be due to illegally made fentanyl.

Death rates of these synthetic opioids increased by more than 72 percent between 2014-2015.

Fentanyl doesn't have its own code for officials filling out death certificates, so deaths "are often recorded generically as a multi-drug toxic overdose," a CDC spokesman told Newsweek. But the most recent numbers were established after analyzing death certificates that noted the presence of the drug.

According to an AJC analysis, fentanyl contributed to nearly 400 deaths in Georgia in a 4-year period.

And, as aforementioned, furanyl fentanyl labeled and sold as oxycodone pills and powder caused 19 deaths in Georgia from 2016 to 2017.

What is the U.S. doing to combat the illegal spread of fentanyl?

After the Drugs Enforcement Agency traced spikes of fentanyl seizures to China, pressure from U.S. officials led to China banning some of the components used to create the drug. But underground labs have replaced the components with other unregulated variants, according to Science magazine.

The DEA also published new guidelines in June on how to handle fentanyl following an instance where an Ohio cop in the middle of a drug dealer arrest accidentally overdosed on the drug after brushing some white powder off with his bare hands, according to NBC News.

In addition, according to Pew Charitable Trusts, some states, counties and cities have stockpiled the overdose reversal drug naloxone, increased funding for drug and addiction treatment, increased police surveillance of drug trafficking and stiffened penalties for the selling of fentanyl.