A MAN has been arrested on suspicion of raping and strangling a teenager in 1982 after a DNA match was made on the national database. 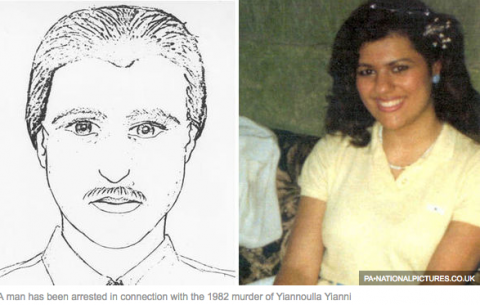 The 56-year-old was arrested over the rape and murder of Yiannoulla Yianni in Hampstead, North London, in 1982.The schoolgirl's body was found on her bed by her parents George and Billi in their maisonette family home in Belsize Road, Hampstead on the afternoon of August 13.She had spent the morning at home with her mother before walking to the Greek-Cypriot family's cobbler store, Nick's Shoe Shop, nearby with her mother where they had lunch with her father and brother at 12.30pm.Around 1.30pm she went home alone to prepare the family's evening dinner and her lifeless body was found an hour and a half later.

There had been no signs that the home had been broken into leading detectives to believe she knew her attacker.Neighbours described hearing her parent's screams.Yiannoulla had been a pupil at Quintin Kynaston School, in St John's Wood and worked part-time at Woolworths in Finchley Road.Scotland Yard at the time said their main and only suspect was a 5ft 6in man in his 20s with black, neatly combed hair, who wore a blue jacket.Detectives said he was possibly from the Greek-Cypriot community and had been seen talking to Yiannoulla outside her house an hour before she was found.They appealed for anyone who saw anything suspicious to come forward especially if they saw someone running away looking dishevelled or covered in blood between 1.30 and 3.30pm.But despite numerous appeals, an offer of a reward and over 1,000 witness statements taken no arrests were made.Detectives re-opened the murder investigation in 2001.Today Scotland Yard announced the 56-year-old, who would have been around 23 at the time of the murder, was arrested on Tuesday in Golders Green, north London.His DNA was matched after his arrest on an unrelated matter.The man remains in custody.

Scotland Yard said: "Detectives from the Homicide and Major Crime Command have arrested a man for the rape and murder of a teenage girl which took place in Hampstead over 30 years ago."A murder enquiry was launched by the Met on Friday, 13 August 1982, after the parents of 17-year old Yiannoulla Yianni, found their daughter's body at their family home in Belsize Road in Hampstead."Yiannoulla had been raped and strangled."On Tuesday, 12 January 2016 a 56-year old man was arrested at an address in Golders Green on suspicion of rape and murder."The arrest follows a match being made on the National DNA Database following the arrest of the man for an unrelated matter."Yiannoulla's family have been informed of this development."They added: "Since her murder the Met have made a number of public appeals for information, including local and national media appeals as well as offering a significant financial reward for information."Over 1,000 witness statements have been taken and developing forensic techniques explored but despite these extensive enquiries no arrests were made."

Detective Inspector Julie Willats, of the Met's Homicide and Major Crime Command, said: "The Met never closes unsolved murders and regardless of the passage of time cases can and will be reviewed, for any new opportunities to develop previously unknown lines of enquiry, and follow-up any fresh information which has become known to us."Yiannoulla's family - who understandably are still devastated by the loss of their beloved daughter and sister more than three decades ago - have been fully informed of this new development."

A MAN has been arrested on suspicion of raping and strangling a teenager in 1982 after a DNA match was made on the national database.
http://www.express.co.uk/news/uk/634407/Cold-case-DNA-Hampstead-Yiannoulla-Yianni-rape-murder-killing-1982
Tweet
Tags:
cold case homicide
×
Stay Informed