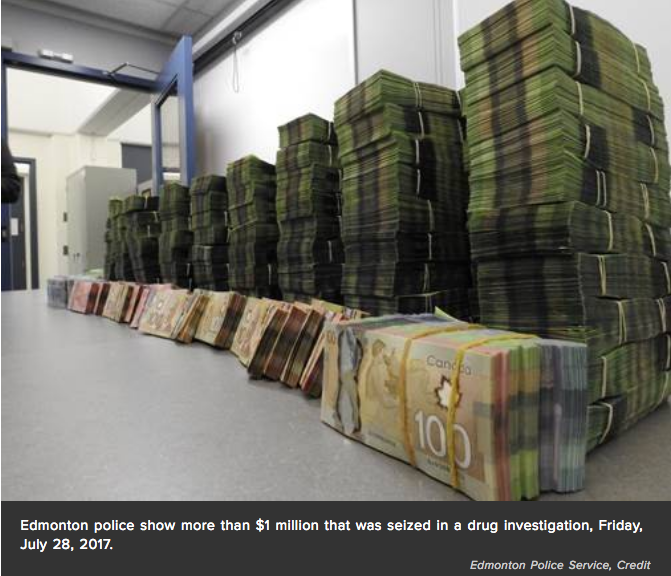 Edmonton police said they have made the largest fentanyl pill seizure in Canadian history and have dismantled a drug lab in the process.

Police said they started a drug trafficking investigation in March.

On July 5, the Edmonton Drug and Gang Enforcement Unit conducted a search warrant on a house in Edmonton, where 67,000 fentanyl pills with an estimated street value of $2 million were seized.

A fentanyl pill processing lab was found at the home in Sturgeon County. An Alberta Health Services executive order, issued earlier this month, stated the house in Sturgeon County at 306-26023 Township Road 544 was deemed "unfit for human habitation."

He said there were two pill presses capable of each pressing out 5,000 pills an hour.

There were also four cement mixers believed to have been used to mix fentanyl powder, buffing agents and cutting agents before being pressed into pills, Wells said.

"The process the people responsible for [this] took to mix the powder and press them out is an innovative – a new way of mixing powder," he said.

Wells said the equipment used to create the drug operation can be bought at any hardware store.

The total quantity of drugs seized in this investigation included:

Edmonton police said they have made the largest fentanyl pill seizure in Canadian history and have dismantled a drug lab in the process.
https://globalnews.ca/news/3632402/edmonton-police-make-historic-fentanyl-seizure-during-drug-investigation/
Tweet
How do you feel about this post?
Happy (0)
Love (0)
Surprised (0)
Sad (0)
Angry (0)
Tags:
altered evidence assault  kits Chain of Custody Big Three: fentanyl lab fentanyl
Kern County deputy could have stolen upwards of $4...
71 oxycodone pills go missing after jury deliberat...
Comment for this post has been locked by admin.